Insurance and reinsurance industry losses from global natural catastrophes and severe weather are estimated to be around $14 billion for the first-quarter of 2022, making it the sixth Q1 in a row where insured losses have exceeded $10 billion.

This is according to Impact Forecasting, the catastrophe modelling and meteorology unit of insurance and reinsurance broking giant Aon.

Aon’s unit puts the economic loss from the same global catastrophe and weather activity at $31 billion, suggesting an insurance protection gap of roughly $17 billion, with some 55% of insured losses from the first-quarter of the year going uncovered.

These remain preliminary figures, with the totals likely to rise as the full costs of certain recent events are still to be fully-quantified.

The first-quarter of 2022 saw an active period of natural hazard activity occurring across the globe, including Western and Central Europe (with Windstorms Dudley/Ylenia, Eunice/Zeynep, and Franklin/Antonia), Australia ( with the East Coast Floods), Japan (with the March 16th Earthquake), and the United States (with a series of Severe Convective Storm outbreaks and tornadoes).

The February windstorm series in Europe is estimated to have caused an insurance and reinsurance market loss of US $4.3 billion by Aon’s team.

The Japan earthquake in March is expected to drive more than US $2 billion of industry losses and the latest we have on that is that local insurers are together reporting around 220,000 claims inquiries from policyholders.

While the Australian floods are estimated at US $1.82 billion, but that is based on claims figures that are already outdated and the latest figure from the Insurance Council of Australia (ICA) already implies closer to US $1.9 billion (a figure our sources expect could rise quite significantly with recent flood damage also factored in).

The US severe convective storms and tornadoes will drive multi-billion dollar insured losses as well, with it still being very early to estimate those events.

Typically, the first-quarter of the year is the quietest catastrophe quarter of the year, but this is the sixth in a row to contribute more than $10 billion of insured losses to the annual total and it looks likely this will rise above $15 billion once all claims are assessed and counted.

Aon cautioned, “It is important to remind that these totals are expected to be upwardly revised, perhaps considerably, in the coming weeks and months. This type of loss development is standard and expected in the aftermath of larger scale events.”

The continued effects of La Niña across the central and eastern Pacific Ocean has heavily influenced global weather in the first-quarter of 2022, including record-setting rainfall along Australia’s East Coast, ongoing severe drought conditions in parts of Africa, South America, and the western United States, plus an earlier start to the severe and convective weather season in the United States.

As we typically see in every quarter these days, so-called secondary perils contributed again.

In recent years, Aon noted that, “The growing impactful nature of “secondary perils” such as winter weather, flooding, and severe convective storm have accounted for a significant portion of the overall quarterly economic cost.” 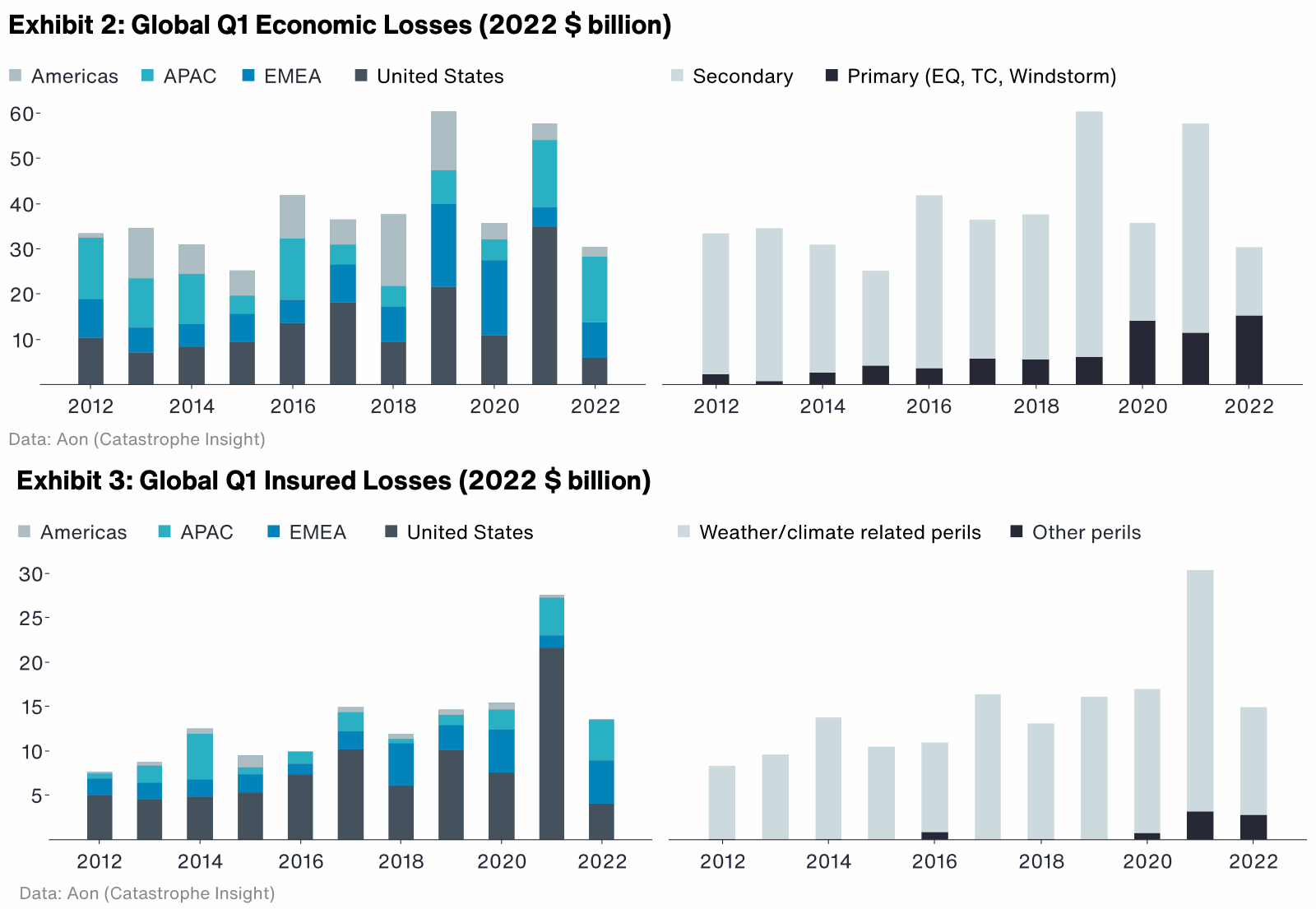 Adding that, “This reinforces the question as to whether the term “secondary peril” has become obsolete because the losses associated with these perils are impacting more populated communities with increasing intensity and resulting in higher loss costs.”

Asia-Pacific (APAC) experienced the highest percentage of Q1 economic losses ($15+ billion), with Europe ($7 billion) and the United States ($6 billion) behind.

But with many impactful events occurring in March, especially in the United States from severe weather and the ongoing Australian flood situation that month, it’s expected these totals will rise and with them the insured totals.

May 24, 20225 min read
The June 1st Florida focused reinsurance renewals are expected to be very late, but prospects…