US primary insurance giant Allstate has renewed its main excess catastrophe reinsurance towers for 2022 into 2023 and the company has raised the top of its per-occurrence reinsurance coverage to $6.6 billion, but on the aggregate side the tower has shrunk with coverage attaching lower-down now thanks to the use of event deductibles.

For the annual risk period from April 1st, Allstate’s renewed Nationwide Excess Catastrophe Reinsurance Program provides coverage up to $6.614 billion of losses, after a $500 million retention.

That’s the occurrence tower side, where Allstate has built out more protection through the catastrophe bond market in the last year.

On the aggregate catastrophe excess-of-loss side of Allstate’s new reinsurance arrangements, the top of the aggregate tower has now fallen to $4.5 billion, down from $4.8 billion last year.

Drivers of this decline will be recoveries made under the aggregate Sanders Re catastrophe bonds, which we documented as they happened here, but also the change in cat bond terms and conditions to utilise event deductibles, instead of franchise deductibles. 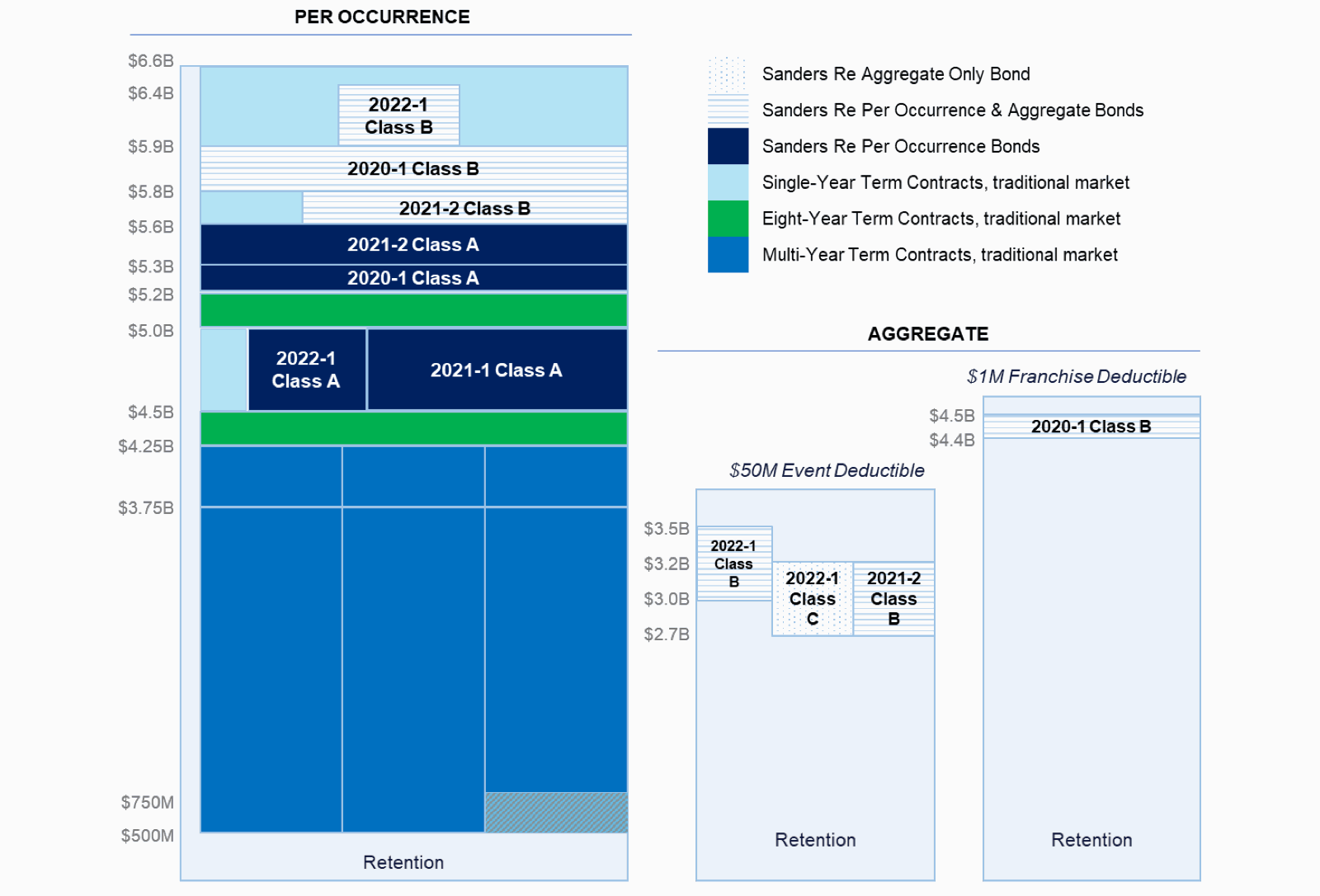 So Allstate has added roughly $850 million to its per-occurrence nationwide catastrophe reinsurance protection for the coming year, with the retention remaining the same as last year.

Adding more cover and higher reinsurance pricing have raised the costs of the renewal for Allstate, with the total cost of its catastrophe reinsurance in the first-quarter of 2022 amounting to $144 million, up from $113 million in the prior year.

Last year, Allstate’s total cost of its catastrophe reinsurance program was $556 million, so it will be interesting to see where the full-year costs come out after the company has placed its Florida and other area programs at the mid-year renewal season.

Allstate’s nationwide occurrence catastrophe reinsurance coverage comes from both the traditional reinsurance and insurance-linked securities (ILS) markets, while its annual aggregate protection is solely from four tranches of catastrophe bonds.

Multi-year traditional reinsurance agreements cover Allstate up to $3.75 billion in excess of its $500 million retention, meaning just 1/3 of the capacity is placed in any one year.

Above $4.250 billion of losses, reinsurance comes through a combination of contracts placed with traditional market reinsurers and catastrophe bonds from Sanders Re.

Most recently, the company placed a $500 million Sanders Re III Ltd. (Series 2022-1) catastrophe bond that provides it with both occurrence and annual aggregate protection.

On the aggregate reinsurance side, while the layers have dropped and attach lower down than last year, the lowest agg cat bond attachment for 2022 is $2.7 billion, compared to $3.8 billion last year, it’s not as clear-cut as it seems.

The lower attachment points might make it look like the aggregate cat bonds would attach more readily, but the shift to event deductibles offsets that by requiring specified named event losses of a certain size to occur, before any aggregate erosion can occur, compared to the low franchise deductible of the older Sanders aggregate cat bonds.

This shift to event deductibles has been a feature of many recent catastrophe bonds, as cat bond investors have pushed back on the franchise deductible in recent months after suffering losses from a number of bonds.

Allstate continues to place the capital markets at the very heart of its reinsurance arrangements and with participation also involved in the tower from ILS fund sources, on a rated or fronted basis we understand, the capital markets component of the reinsurance towers has been rising, helping Allstate to expand its protection as the insurer grows.

August 13, 20225 min read
In recent months, if you’re interested in insurance-linked securities (ILS) or active in the ILS…
error: Content is protected !!