Already some 4,360 insurance claims have been filed in relation to the latest outbreak of severe flooding in Australia, according to the Insurance Council.

As we reported on Sunday, parts of eastern Australia were flooding again after an East coast low brought torrential rains and strong winds to the country.

Sydney and its suburbs were particularly affected, with households evacuated and flood warnings in place, as well as property damage being reported.

The Insurance Council of Australia (ICA) declared a ‘significant event’ yesterday for the still developing severe flooding in Sydney and the surrounding region of the country, with over 50,000 people under evacuation orders at the time.

The ICA said this morning that insurance claims from the Australian flooding in July have reached 4,160, in terms of filed claims, already. That’s since July 1st.

So far, claims are coming in a little slower than two other recent flood insurance loss events in Australia, but it is still early days and the numbers are certain to rise. 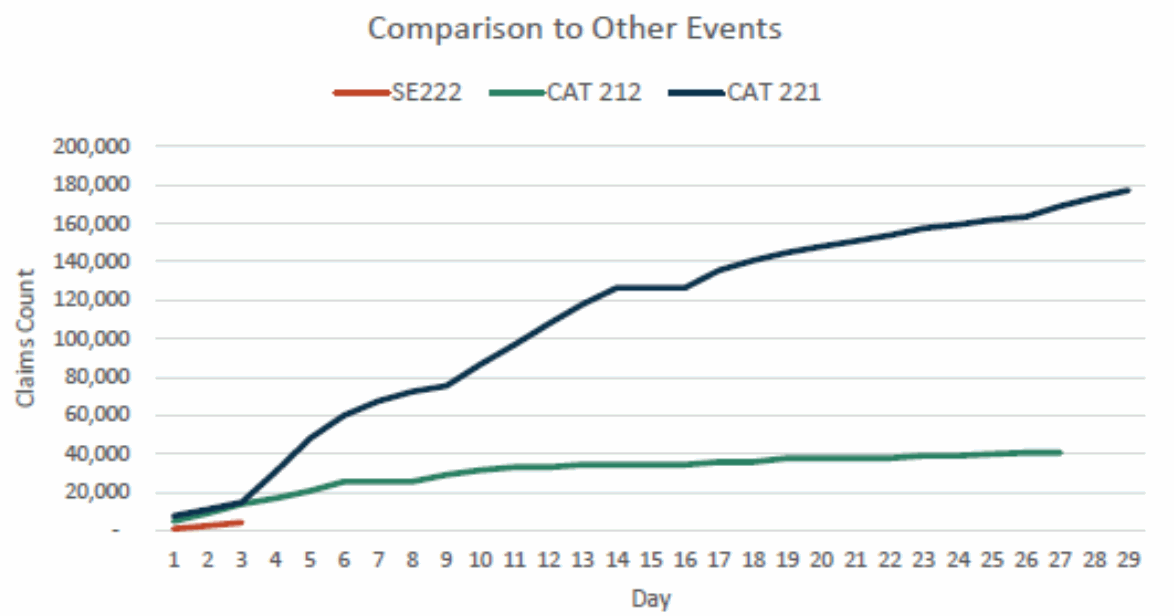 The ICA also said that 84% of the claims filed are for damage to property and 14.5% for motor claims, but at this stage it’s far too early to estimate an insurance or reinsurance industry loss from the flood event.

Primary insurance giant IAG said that as of midday Tuesday 5th July, it had received 1,233 claims across its insurance brands from the severe weather and flooding impacting the state of New South Wales.

“The number of claims is likely to rise over coming days as heavy rains continue moving across  New South Wales and as floodwaters recede and people return to their properties,” the insurer said.

IAG Managing Director and CEO Nick Hawkins commented, “This is an incredibly difficult and stressful time particularly for people who have suffered multiple storms and floods in just the past few months and our teams are standing by to provide immediate help.

“We’re urging customers to lodge their claims as soon as possible so we can ensure they’re safe by providing temporary accommodation if required and emergency financial assistance.

“At this stage the majority of claims received so far are for water entering through roofs, wind damage and fallen trees.”

The heavy rainfall that affected the Sydney area has now slowed, but severe weather has also shifted further north to the NSW Hunter and mid-north coastal region.

Flood risks remain in the Sydney area, while meteorologists warns of rising rivers to the north.

Some 85,000 people were subject to evacuation orders as of Wednesday morning, July 6th.

The July 2022 flooding in Australia comes as parts of the eastern and southeast coastal areas of the country are still recovering from a number of flood events that occurred earlier in the year.

The East Coast Flood from February and March 2022 now holds the record as the costliest flood in Australian history and the third most costly natural catastrophe event, according to the Insurance Council.

That event is now counted as the third most costly extreme weather event ever recorded in the country, as the insurance and reinsurance industry loss estimate has been raised to AU $4.8 billion.

Reinsurance costs are rising for Australian property and casualty insurers, as natural catastrophe industry loss costs in the country have escalated significantly in recent years, S&P Global Ratings said recently and this flood episode will not instil any more confidence in reinsurers writing business in the country.

This latest flood event comes as Australian insurers have renewed some of their reinsurance arrangements.

HCI to set up new Florida carriers to capitalise on market disruption: CEO

CATCo funds to benefit from another release of trapped capital