In recent months, if you’re interested in insurance-linked securities (ILS) or active in the ILS marketplace, you could not have missed the widely discussed issues of spread widening seen in catastrophe bonds, or the hardening of reinsurance pricing and how that spills over to ILS rates and returns. 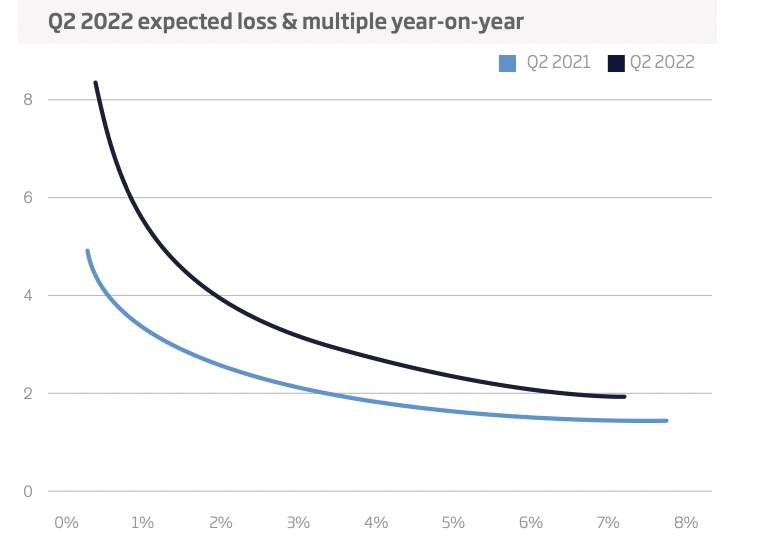 The effects of the spread widening may be felt for a while and with reinsurance rates for catastrophe exposures having hardened considerably at the mid-year renewals, it seems unlikely spreads or rates-on-line for catastrophe bond coverage will fall back to where they sat last year, any time soon.

Cat bond deal arrangers and cat bond fund investment managers discussed a developing mismatch between supply and demand early in the second-quarter of the year, that served to drive prices higher in many cases.

The mismatch was on two counts, firstly on the risk appetite front and secondly on available capacity, so manifesting in supply and demand side dynamics of the catastrophe bond and broader ILS market.

While, at the same time, many experienced ILS end-investors had been impacted by consecutive loss years, elevating risk aversion in the space and causing some to hold off on any additional capital deployments, also causing some investor shifts as well.

Add to that, a market dynamic that saw strong cat bond fund inflows in late 2021 and early 2022, that had largely been deployed by the time the market pipeline exploded into life in the second-quarter of this year, making capital availability one of the key drivers of the widening of spreads.

That is, alongside the hardening of reinsurance and retrocession pricing more broadly, which also served to exacerbate conditions in the cat bond market, as cat bond investors demanded harder pricing as well.

It’s natural that with reinsurance and retrocession pricing having firmed over consecutive renewals now, the cat bond market was never going to maintain the lower-multiples that were seen a year ago. So the spread widening also saw cat bond pricing catch up to reinsurance and retro, more closely aligning them around the renewal season.

As we explained in a recent article, the catastrophe bond market seemed to become more balanced around early to mid-June, as a greater equilibrium between supply and demand was found, resulting in more attractive execution for some recent cat bond sponsors.

That also perhaps marked the time of the peak in pricing of reinsurance, coming just after the Florida renewals, which may have also driven the peak(ing) of cat bond pricing as well.

Now, with all the data available on cat bond pricing through the second-quarter, we can compare this back to historical experience to visualise the higher catastrophe bond pricing seen in 2022.

Our widely read quarterly catastrophe bond market reports detail the second-quarter trend in pricing, which can be compared year-on-year by looking back at a prior year quarter.

The visualisation of cat bond expected losses vs multiples at issuance, provides a clear trend-line for Q2 2022 cat bond pricing versus the prior year, as seen below.

You can see that investors were demanding higher returns right the way along the risk curve.

It’s interesting to compare the Q2 spread widening year-on-year with how the same chart looked for the first-quarter of the year.

Remember, the spread widening really took effect in the second-quarter, but the chart below shows that spreads had already widened year-on-year for the lower expected loss deals, with higher multiples being demanded by investors. 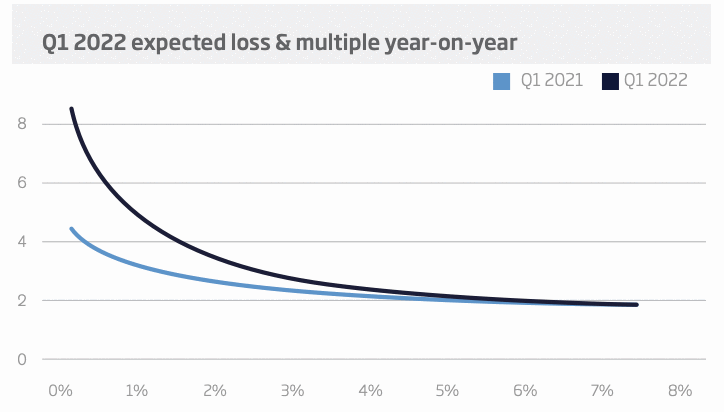 The same chart from the prior year’s report, so Q2 2021, allows a comparison of the pricing curves from Q2 2020 as well.

What’s interesting here, is that clearly spreads were tightening into the middle of 2021, so the curve for 2021 shows below that of 2020, implying investors were willing to take a lower multiple of return for similar levels of risk. That perhaps makes the spread movements in 2022 all the more remarkable, as investors clearly reversed the trend seen the year before. 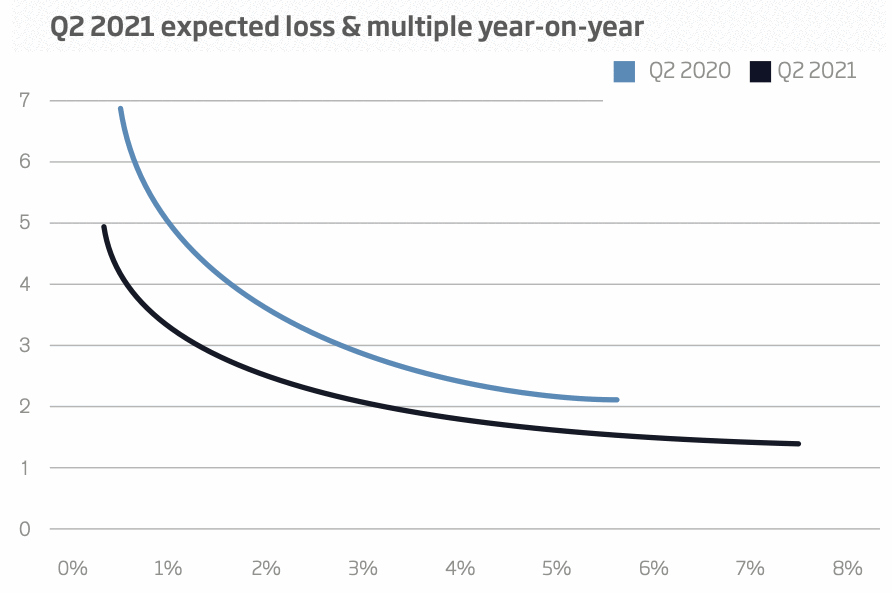 The same trends are clearly evident in our range of charts and visualisations on the catastrophe bond and related insurance-linked securities (ILS) market.

First, our chart that tracks the average catastrophe bond expected loss, coupon and spread at issuance by year.

But, at this stage of 2022 and with all cat bond issuance so far this year included in the data, as we keep all of these charts up-to-date with every new issue, the spread so far this year has reached 5.5%, as seen below, the highest since 2012.

Click the chart above, or this link, for an interactive version.

Next, our chart of catastrophe bond multiples at market issuance, which reflects the trends in all of this data, but also shows that average cat bond multiples are now back at levels not seen since 2013.

This data has been collected by Artemis over the 25 year period of the catastrophe bond market’s existence and is supported by almost $150 billion of issuance since that time, all of which are detailed in the Artemis Deal Directory.

You can access all of Artemis’ catastrophe bond market reports here and analyse our data in charts and visualisations here.

Please join us at our upcoming cat bond and ILS market conference in London.