Munich Re continues to top a list of the world’s largest reinsurance companies, while the top 50 global reinsurance groups according to rating agency AM Best grew their premiums nearly 10% across the last year on the back of firming rates and price increases. 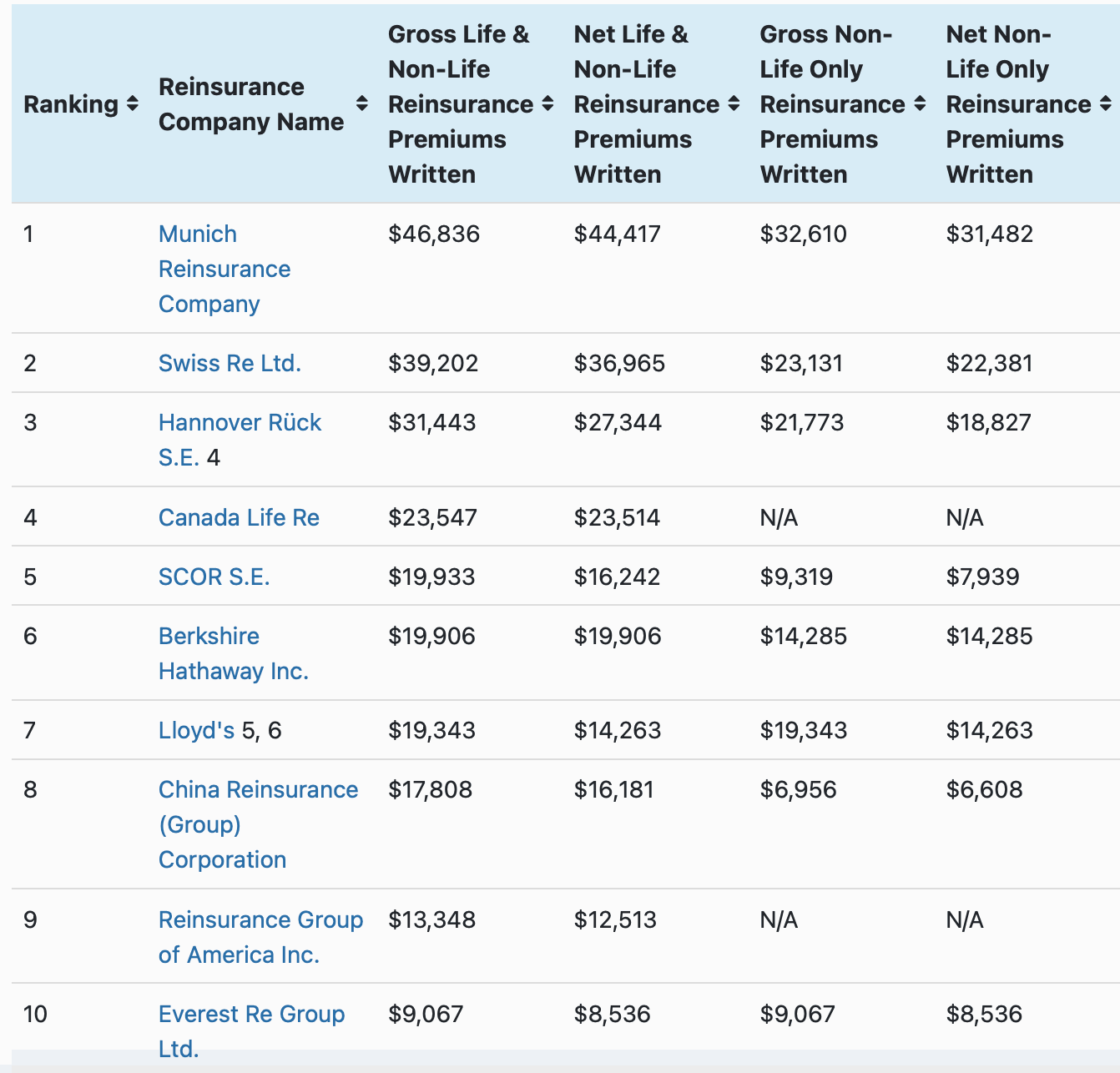 The latest data on the 50 largest reinsurance groups in the world, from rating agency A.M. Best, shows a few changes, but a general story of premium growth.

The data on these top reinsurance companies in the world is available to analyse here over at our sister publication Reinsurance News.

AM Best has updated its analysis this year, with only year-end gross reinsurance premiums written included, eliminating any primary premiums.

Rankings of the top 50 reinsurers from before 2021 had included primary premium that was less than 25% of a reinsurers’ total premium volume.

As of year-end 2021, these reinsurance firms had largely grown.

This is, in the main, thanks to premiums increasing on the back of higher rates and pricing, helping to expand their numbers.

“Many of the reinsurance companies AM Best rates reported that a third to half of their premium growth could be attributed to pricing increases, as opposed to exposure growth,” explained Clare Finnegan, senior financial analyst, AM Best. “Rate increases in many of the reinsurance lines are expected in 2023, although they will vary by line of business and territory.”

Interestingly, AM Best said that a reduction in property catastrophe reinsurance premium may counter growth, given a number of reinsurers have begun to withdraw or substantially reduce their participation in that market.

The top three reinsurers remain the same, in Munich Re, Swiss Re and Hannover Re, but there was movement among the other companies in the top 10 in the latest ranking.

Of these, life and longevity reinsurance specialist Canada Life Re moved up to No. 4, the first time a dedicated life reinsurance group has ever made the top four, AM Best said.

SCOR is now in fifth, while Berkshire Hathaway and Lloyd’s come in sixth and seventh, followed by China Re, Reinsurance Group of America (RGA) and Everest Re, completing the top-10 reinsurers.

The top 50 global reinsurers posted an average combined ratio under 100% for the first time in five years, which is a notable improvement, despite catastrophe losses still being elevated in 2021.

Once again, a good number of reinsurance groups that leverage a relatively significant amount of third-party capital from investors, alongside their own balance-sheet capital, feature in the list, with premium growth evident from the likes of RenaissanceRe, PartnerRe, TransRe, AXA XL and Validus.

The Bermudian, third-party capital user reinsurance groups make up a strong contingent in the top-20 of the list.

It would be interesting to understand how the third-party and insurance-linked securities (ILS) capital these reinsurers manage assists them in growing into the current marketplace.

Analyse the full list of the Top 50 Global Reinsurance Groups.

Analyse the full list of the Top 50 Global Reinsurance Companies.